It was a ruthlessly efficient display of finishing from the Blues at Wembley, which has been the scene of nothing but misery for Spurs this season, having faltered under the arch in their failed Champions and Europa League campaigns.

Conte – whose name adorned a banner trailing a light aircraft flown over the stadium – sprung a surprise when he left Eden Hazard and Diego Costa on the bench, but Willian made the most of his inclusion with a fourth-minute free-kick and a penalty on the stroke of half-time.

Spurs had twice fought back with Harry Kane’s stooping flicked header from Christian Eriksen’s pinpoint delivery, the Dane then teeing up Dele Alli to make it 2-2 in the 52nd minute.

It was Mauricio Pochettino’s side who were forcing the issue and looking the more likely to win it, but Conte called on Hazard and Costa from the bench, with the Belgium international’s low strike putting Chelsea ahead once more inside the final 15 minutes.

The Blues saved the best until last, Matic’s thunderous drive bouncing in off the crossbar to put Chelsea into the final and strike a psychological blow in the top-flight title race, Conte’s men four points clear of Spurs with six games left.

There was a tribute paid to Ugo Ehiogu before the match after the Spurs Under-23 coach passed away having suffered a cardiac arrest.

Toby Alderweireld was booked early on for a foul on Pedro and Willian stepped up to send the set-piece beyond Hugo Lloris from 20 yards.

Spurs initially struggled to respond, but N’Golo Kante had to be alert to block Kane’s shot after the striker collected Eriksen’s threaded free-kick.

It was the same Spurs combination that unpicked the lock in the 18th minute, Eriksen’s inswinging cross deftly headed into the far corner by Kane. 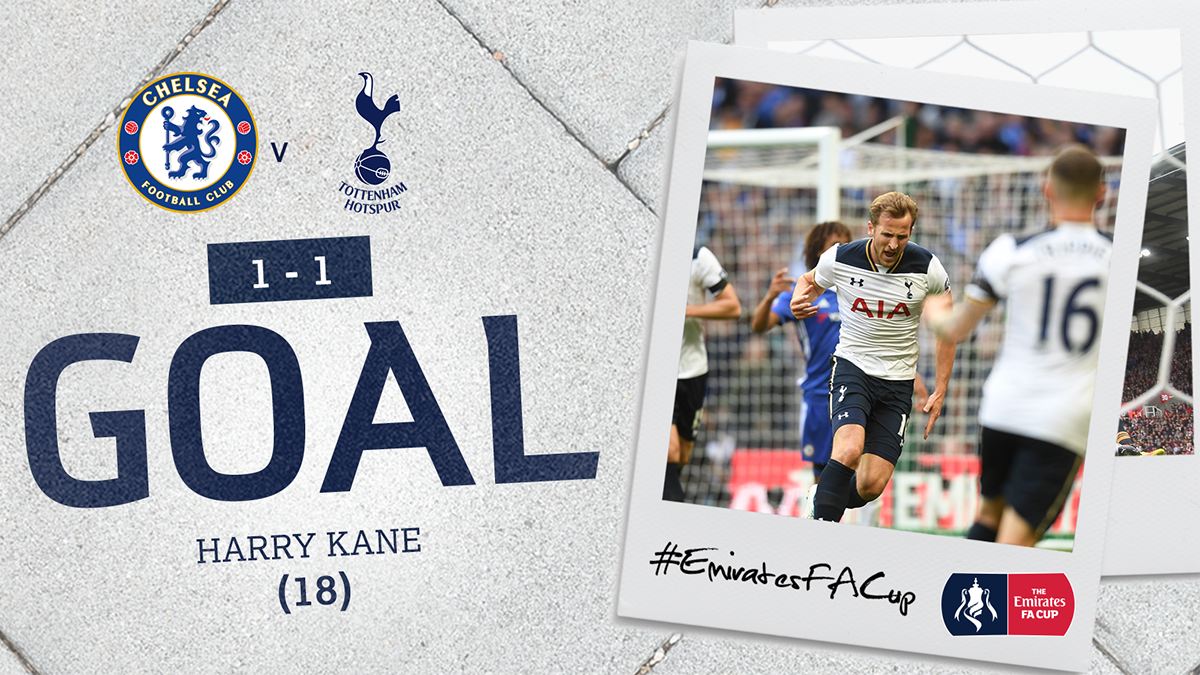 GOAL! @HKane levels it up for @SpursOfficial! #emiratesfacup

Pochettino’s side were much the more threatening after that, with Kane forging ahead again before Cesar Azpilicueta halted his run in the box.

Eric Dier came much closer to putting the White Hart Lane club ahead as he leapt to meet Jan Vertonghen’s cross, but the England midfielder saw his header drift narrowly wide.

The lively Eriksen tested Thibaut Courtois’ handling – which proved sound – as he tried his luck from 25 yards five minutes before the interval.

But there was a sucker punch in store for the Spurs, Son Heung-min – playing out of position at left wing-back – bringing down Victor Moses and Willian coolly converting the spot-kick, while Lloris got away with handling the ball outside of his area in one final moment of drama before half-time.

A captivating last-four clash continued to deliver as Alli – who scored both goals when Spurs beat Chelsea 2-0 in January’s Premier League match – made it 2-2 seven minutes after the restart, poking Eriksen’s superb cross past Courtois.

Conte called upon Costa and Hazard on the hour mark, with Willian and Michy Batshuayi making way, while Son soon departed for Kyle Walker after an underwhelming outing for the South Korean.

It was Hazard who made the biggest impact, though, Chelsea’s first second-half shot on target flying into Lloris’ bottom-left corner after Spurs failed to properly clear a corner.

5 – Eden Hazard has scored more goals for Chelsea against Spurs than he has against any other side. Danger.

The French goalkeeper was then a spectator for Matic’s rasping strike as Chelsea booked a final spot against either Manchester City or Arsenal, who meet on Sunday, while Spurs – who saw Kane’s free-kick stopped on the line by Courtois – were left to reflect on a defeat for the seventh FA Cup semi-final in a row.

– Chelsea have reached their seventh FA Cup final of the 21st century, more than any other side in that time (Arsenal could equal it on Sunday).
– Christian Eriksen’s two assists in this game means he has provided more than any other player in all competitions among Europe’s big five leagues this season (20).
– Including penalty shootouts, Chelsea have won 10 fixtures at the new Wembley Stadium, second only to Manchester United (11).
– Meanwhile, Tottenham have suffered seven defeats at the ground (including shootouts), more than any other side.
– Harry Kane has scored 21 goals in his last 24 London derby matches in all competitions for Spurs.

Ajike is one of Nigeria's top Sportscasters with over 15 years of experience in writing and talking Sports.

Bastian Schweinsteiger out for another month

What do you think? Cancel reply